The USODA USNT Committee supports a National Team comprised of up to 36 sailors (not including seniors) based upon 2019 Optimist Team Trials results, and approximately 42 sailors based upon 2019 Optimist Spring Team Qualifier results. Up to 5 additional sailors may be added to the National Team at the discretion of the USNT Committee and the USNT Performance Director at any time during the season. 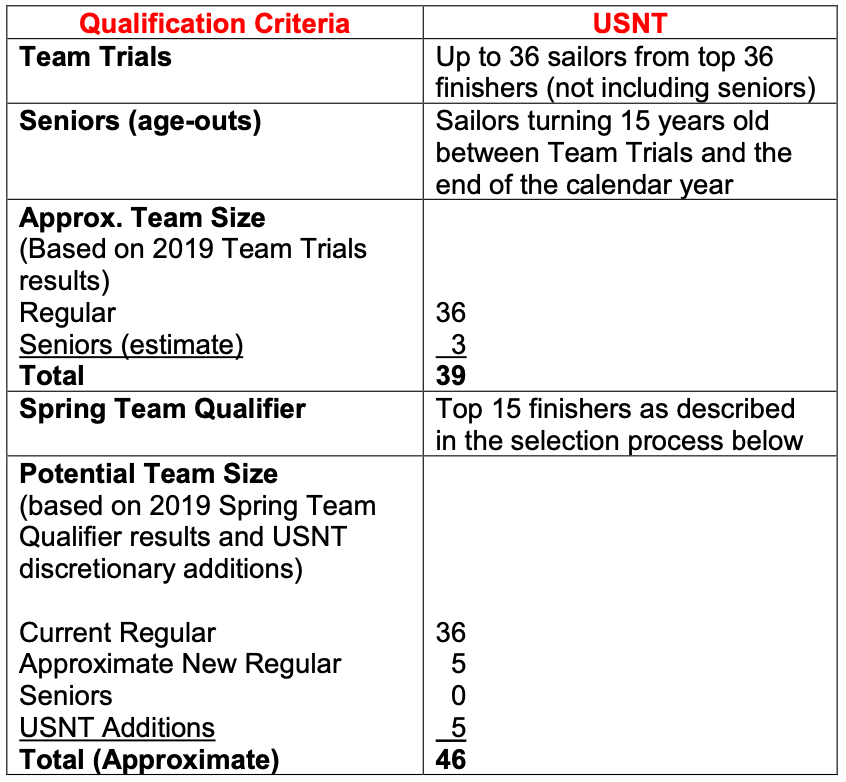 The top 36 finishers at the 2019 Optimist Team Trials will be invited to join the National Team for the 2019-20 season.

Additional sailors will be invited to join the USNT based on the results of the 2019 Optimist Spring Team Qualifier.

In addition to spots designated for the USNT at Team Trials and at Spring Team Qualifier, the USNT Committee and the USNT Performance Director may, within their sole discretion, add up to five (5) sailors to the USNT at any time during the season. Such discretion will be reserved for sailors with special circumstances that may have prevented the sailor from competing and/or qualifying for invitation at Team Trials or Spring Team Qualifier, but where the sailor has exhibited the high skill level otherwise required to qualify for invitation to the USNT. Sailors may not petition for special invitation. Any sailors invited to join the USNT during the season at the discretion of the USNT Committee and USNT Performance Director will be required to pay a membership fee of $650.

> If a sailor cancels before the initial registration deadline, then they may receive a full refund.

> If a sailor cancels after the initial deadline, but before registration closes (so within the "late fee" period), then they may receive a refund for the practice fee less the $175 late fee.

> If a sailor cancels after registration closes then there is no refund since coaches have been confirmed, flights paid for, etc.